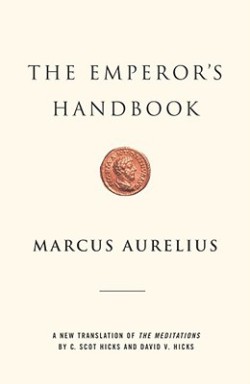 Aversion translated by Scot and David Hicks of the “Meditations”, a classic book of advice and Stoic Philosophy written by the Roman emperor Marcus Aurelius in the 2nd century.

Just over two weeks ago I wrote a post saying I wanted to read more and would be blogging about the books I read. The first book I read, the Meditations is a work almost 2000 years old, written by perhaps the most powerful man in the world at the time, Roman Emperor Marcus Aurelius.

Emperor Marcus Aurelius, one of Rome’s greatest leaders, was deeply influenced by the Stoic philosophy which he followed so the Meditations offer valuable insight of not only a second century Stoic, but also a Roman Statesman, Soldier, General, family man and Emperor.

The book, which is really a collection of the emperor’s private thoughts, and was never meant for publication, has come to be known variously as The Meditations of Marcus Aurelius, The Emperor’s Handbook, Meditations or a combination of the above.

The Meditations is divided into twelve ‘Books’, which each book dealing with different things though there are some themes which keep recurring.

The first book is a sort of acknowledgements, where Marcus Aurelius mentions what he got and learnt from the people he knew and also from the gods: From his grandfather the beauty of manners and to restrain anger, from his mother to guard against evil action and to be religious, from Alexander the Critic to avoid censoring others, from Fronto to be sensible, from Claudius Maximus ( a respected statesman of the time) “in all things to have power over myself..to be cheerful and courageous in sudden accidents” and from the gods a good family.

The second book opens with the emperor reminding himself of the kinds of people one meets each morning, the ungrateful, the insolent and the envious, and how in most instances these men have not desired to be so but have been forced by circumstances.

One thing the Meditations stress throughout is that man is responsible for his thoughts and actions and must therefore cultivate them to make them good. However a man is not responsible for the actions of others though he may try to help them, as Aurelius’s rather cheekily puts that a man with smelly armpits should be politely told but whether he listens is not important as you’d have done your duty.

In the Meditations Marcus urges purposefulness, reason and resolve, saying energy should not be spent on unnecessary tasks. Total concentration must be applied to all works if they are reasonable. According to Marcus, a man must have solid principles but must be prepared to change them any moment if convinced to do so by reason.

Another important theme is that of life, its meaning and death. The emperor continuously points out that man lives only for the present, as the past is gone and the future is uncertain. Man, therefore must not live in regrets or overly worry about the future or death. Death, Marcus says, is meaningless, for if there is no afterlife then you feel nothing and if there is an afterlife then it’s another chance to live.

In the later books of the Meditations, the Emperor warns against speculation, hearsay and worrying about what others say. The rational man in Aurelius’ view must and will act justly and honestly regardless of the opinions of others.

“I marvel at how men love themselves more than others, while at the same time caring more about what others think of them than what they think of themselves.”

What is surprising about this book is that it was written by a man who had everything his heart could possibly desire yet was neither showy and excessive nor ostentatious. His humility and respect for all men  is clearly at odds with the fact that the Emperor of Rome in the second century was perhaps the most powerful man on the globe.

This is a great book and the most profound text on life I’ve ever read save the bible. I can proudly say that Emperor Marcus Aurelius changed my life and will continue to inspire me to be a better person.

This Site has Moved

Web Development and Other Things

Women's Academy for Leadership and Political Excellence
Stories of Zimbabwe

Zimbabwean Vignettes through the ages and days

a blog about spirituality, minimalism, and life

with hope, the future is closer

random thoughts of a vivid mind...

capturing the souls of black folk. a blog by Chika Oduah

News and reviews from the world of gadgets, gear, apps and the web

Moment Matters | Interesting articles you can relate
The Gentlemen's Standard